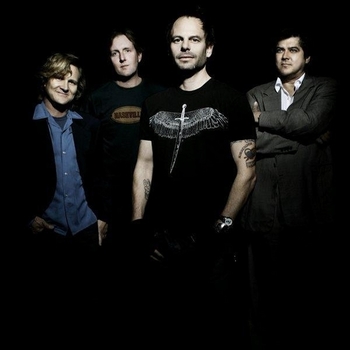 Tomorrow we can drive around this town,
And let the cops chase us around,
The past is gone but something might be found to take its place,
Hey jealousy
—"Hey Jealousy"
Advertisement:

Gin Blossoms is an American Power Pop band formed in 1987, in Tempe, Arizona. They took their name from a photo of W. C. Fields which bore the caption "W.C. Fields with gin blossoms", referring to what appeared to be the actor's gin-ravaged nose, but was actually a skin condition known as rosacea. They hit it big in 1993, when the singles "Hey Jealousy", "Found Out About You", "Allison Road" and "Until I Fall Away" from their 1992 album New Miserable Experience all became major pop and rock radio hits.

Founding guitarist and songwriter Doug Hopkins killed himself in 1993, shortly after he had been dismissed from the band. The band broke up in 1997 after their third album Congratulations...I'm Sorry, but reformed in the mid-2000s.

This band and their music contain examples of: