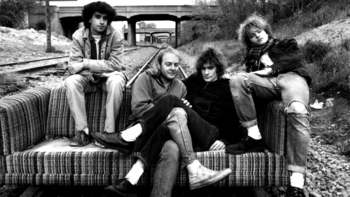 I'll try to find you left of the dial... note  The classic lineup. L-R: Chris Mars, Bob Stinson, Paul Westerberg, and Tommy Stinson
"Oh, meet me anyplace or anywhere or anytime
Now I don't care, meet me tonight
If you will dare, I might dare."
— "I Will Dare"
Advertisement:

Defining Alternative Rock bands, before it was cool. The definitive lineup included Paul Westerberg (rhythm guitar, vocals), Tommy Stinson (bass), Bob Stinson (lead guitar) and Chris Mars (drums). Bob Stinson was replaced by Slim Dunlap in 1987 and Chris Mars by Steve Foley in 1990. Since the breakup of the band in 1991 Westerberg has released numerous solo records, and Tommy Stinson has played in a number of bands, most notably with Guns N' Roses.

Starting out as a loud fast Hardcore Punk band, they transitioned into a melodic alternative rock band, driven by the heart on the sleeve, earnest songwriting of Paul Westerberg. In terms of general popularity the Mats barely register compared to the likes of their contemporaries R.E.M. or their arguable successors Nirvana, Pearl Jam and Soundgarden. But don't feel too sorry for them though, much of their unpopularity can be attributed to their drunken stage antics, outright disdain for making music videos, and a penchant for biting the hand that feeds.

The band (well, Westerberg, Tommy Stinson and two touring members) reunited in 2012 and played several shows for the next two years, until 2015, when Westerberg announced that, once again and for the last time, the Replacements were breaking up.

"Sorry Ma, Forgot to Take Out the Tropes":