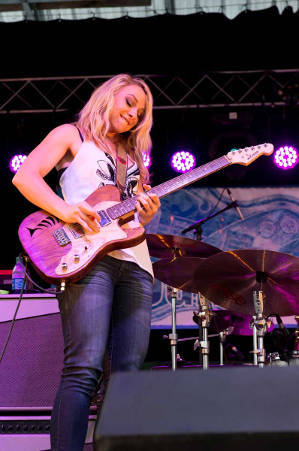 Fish playing live at a Blues Festival in 2014
Advertisement:

Born into a musical family, Fish started out playing drums, but switched to guitar at 15, after a Sheryl Crow concert made her realize that women could play lead. Despite that relatively late start, her musical background, her intense dedication, and the help of family members soon allowed her to master the new instrument. In 2009, at age 20, Fish released a home-made live album, Live Bait—now a collectors item—which got her the attention of Ruf Records. Ruf signed her for a novelty act called Girls with Guitars. The band released a Self-Titled Album in 2011, which included three songs written Fish. It was produced by guitarist Mike Zito, who began mentoring her, and who also produced her first solo studio album, Runaway, which won a Best New Artist award from the Blues Foundation.

In 2013, Fish released her second studio album, Black Wind Howlin', also produced by Mike Zito, and also released her first music video for the song "Lay It Down". The album cover and the video both prominently featured her custom guitar with its stylized fish logo carved in the top.

In 2015, she released Wild Heart, produced by Luther Dickinson of the North Mississippi Allstars, which reached #1 on the Billboard Blues charts. In 2017, she released two albums, and made big changes in the band. Long-time drummer "Go-Go Ray" Pollard left, and Fish added keys and a pair of horn players, changing the trio into a sextet. The year's first album, Chills & Fever, added garage rock and R&B to her sound. For the next album, Belle of the West, she went with a more country-blues style, with more acoustic instruments, including violin. The latter album, which was also produced by Dickinson, also reached #1 on the Blues charts.

Fish is usually vague about her influences, saying she listens to a lot of different people, but tries not to take too much from anyone in particular. As a kid, she mostly listened to classic rock, country, and grunge. She has mentioned The Rolling Stones as a particular favorite. As a pro, she's sought out more of the old, classic blues, but still tries to cast a wide net.

These tropes are Fishy: