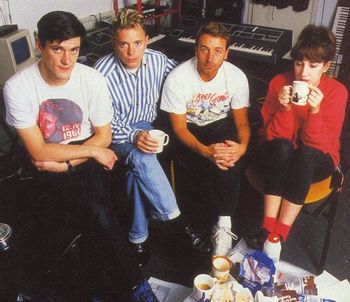 The classic line-up of New Order enjoying a cuppa. From left to right: Stephen Morris, Bernard Sumner, Peter Hook and Gillian Gilbert.
"How does it feel?
To treat me like you do.
When you've laid your hands upon me.
And told me who you are."
— "Blue Monday"
Advertisement:

New Order are a New Wave Music/Post-Punk/Electronic Music/Alternative Rock band from Manchester, England. They were one of the more enduring and influential bands of the 1980s, and until its 1992 bankruptcy, one of the flagship bands for Tony Wilson's Factory Records label. They were among the first bands to be branded with the genre of "Alternative Rock," were one of just two electronically-oriented bands in the genre to achieve mainstream commercial success in both the US and UK without abandoning their alternative ethos (the other being Depeche Mode), and were wildly influential on later bands of the genre's pre-Nirvana days.

The group started on May 18, 1980, when Joy Division's frontman and Face of the Band Ian Curtis killed himself on the eve of the group's first tour of America. Joy Division had an agreement that if any member left, for any reason, the band would break up. And it happened.

Wishing to continue their music careers, but honor Curtis' memory by avoiding The Band Minus the Face, guitarist/keyboardist Bernard Sumner, bassist Peter Hook, and drummer Stephen Morris reorganized as a new band, with Sumner taking over lead vocals, Morris's girlfriend (and later wife) Gillian Gilbert joining on guitar and keyboards, and everybody in the band taking up keyboard, sequencing and programming duties. The band debuted anonymously on July 29, 1980, renaming themselves "New Order" the following year. After a slow start, with their first album Movement being criticized for a perceived lack of artistic progress post-Joy Division (particularly after their debut single "Ceremony"/"In a Lonely Place", which consisted of two leftover Joy Division songs that they had rehearsed but never formally recorded prior to Curtis's suicide), the band shifted their music towards the dance/electronica sound which would become their trademark.

While Joy Division had been one of the first punk-influenced bands to make prominent use of synthesizers and drum machines (partly thanks to Curtis introducing his bandmates to Kraftwerk), New Order embraced them wholeheartedly, became pioneers of electronic dance music, and outright invented the Alternative Dance genre. Their 1983 single "Blue Monday" stayed several months on the UK Top 40, peaking at number 5, and remains the best-selling 12" single ever released. With Wilson, they founded the UK's iconic first New York-style super-nightclub, The Haçienda, which for much of its existence was kept afloat by the band's record sales and sometimes out of their own pockets.

For the 1990 World Cup, they recorded "World In Motion", that year's theme song for the English national football (soccer) team and their final release on Factory Records. To date, it is their only UK #1. Following Factory's bankruptcy two years later, the band signed onto London Records, who had previously attempted to buy out Factory in the lead-up to the bankruptcy, only to find out that none of the label's artists were actually signed onto them (meaning the musicians, not the label, were the legal owners of their music).

Following intense Creative Differences between Sumner and Hook as well as burnout from a lengthy United States tour, New Order went on hiatus in 1994, one year after the release of their record Republic (which spun off their last big hit, "Regret", which wound up being their biggest hit Stateside). In the meantime, the band members focused on side projects (Sumner in Electronic with Johnny Marr of The Smiths, Hook in Revenge and later Monaco, and Morris and Gilbert as The Other Two). They reunited in 1998 and released two more albums, plus some soundtrack work and multiple best-of compilations. In 2001, Gilbert retired to rear her and Morris' children (more specifically their daughter, who had fallen ill) and was replaced by Phil Cunningham. In 2007, Peter Hook left the band, which, in late 2008 led New Order to take another lengthy hiatus; whether or not it was a breakup is debated even between Hook and his bandmates.

After the split, Sumner and Cunningham formed a new band, Bad Lieutenant, with bassist Tom Chapman and guitarist Jake Evans. Their one and only album Never Cry Another Tear was released in September 2009, preceded by a single, "Sink or Swim". The album featured Stephen Morris on a handful of tracks, but he is not a full member of Bad Lieutenant. Blur bassist Alex James also appears on a handful of tracks on the album as well.

In 2011, New Order reformed with the lineup of Sumner, Morris, Gilbert, Cunningham and Bad Lieutenant bassist Tom Chapman replacing the still-estranged Hook. The reformed band has performed at several festivals throughout 2011 and 2012. In 2014, the band signed onto Mute Records, and in 2015, the band released their ninth studio album, Music Complete, through the label. Since then, they've been continuously touring. Hook continues to tour with his solo band Peter Hook and The Light, which mainly plays Joy Division and New Order covers, including performances of full albums.

The band are portrayed by actors in the movies 24-Hour Party People (about Factory Records) and Control (a biopic of Curtis). In both of these movies, the actress playing Gillian Gilbert gets no lines, and appears for only a single scene. They collaborated with The Chemical Brothers on an original song for the former, and composed the score for the latter. The band also wrote the score for Salvation!, a 1987 televangelism spoof starring punk singer Exene Cervenka. Their music has also featured prominently in several other movies, including Pretty in Pink, Danny Boyle's Trainspotting and The Beach, the first Blade movie, and Sofia Coppola's Marie Antoinette (2006).

Tropes Used by the Band: