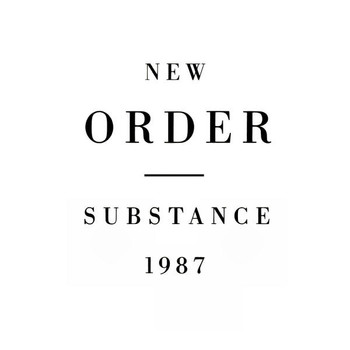 "I feel so extraordinary, something's got a hold on me..."
Substance is a compilation album by English Alternative Dance group New Order, released in 1987. Released as a stopgap during the interim between 1986's Brotherhood and 1989's Technique, specifically while the band were touring North America, the album compiles every 12" single released by New Order from their formation up until around the first half of 1987 (plus "Procession", which is included on CD and cassette copies despite having only ever seen release as a 7" single).
Advertisement:

As LP sales were gradually declining throughout the 80's, the album was New Order's first product to de-prioritize the format. Not only do the CD and cassette releases manage to squeeze all of the band's 12" singles onto one disc/tape, something that required two records for the LP release, but they also add in a second disc/tape devoted to the B-sides of the included singles and then some, with a few more B-sides present on cassette than on CD, though cassette releases in some countries only contained the first cassette. Due to the limited capacity of physical media back in the day, a good amount of tracks were edited down to fit a shorter length, with "Temptation" and "Confusion" being outright re-recorded from the ground-up. As non-album singles were still pretty common in the U.K. at the time, this was the first stateside appearance for many of these tracks, though some were previously released on the band's studio albums in substantially different forms, no pun intended.

In addition to collecting the band's 12" A-sides and B-sides, Substance also includes two new songs: "True Faith" and "1963", recorded specifically for this album and produced by Pet Shop Boys and Erasure collaborator Stephen Hague. The songs were released together as a 7" and 12" single earlier in 1987 to promote the album, with "True Faith" as the A-side and "1963" as the B-side. Because of this, the songs exist in a weird state of being both non-album singles (as they were never included on an actual studio album) and an album single (as they were written for and released to promote Substance). The single reached no. 4 on the British pop charts and proved to be their mainstream Breakthrough Hit in the U.S. (having already broken through on the dance charts with "Bizarre Love Triangle" the previous year), reaching the Top 40 on the Billboard Hot 100 for the first time as the song's Surreal Music Video became an MTV hit. The hit single propelled the album to platinum status, the band's first certification in that country. In 1988, Quincy Jones, head of the band's American label, Qwest, remixed "Blue Monday" and released it as "Blue Monday 1988" to promote the compilation as well.

This album is also notable for being one of only a small amount officially released on Digital Audio Tape (DAT) during the format's limited commercial lifespan before the record industry's freakout over potential piracy applications relegated it to professional use; the DAT release is a double-tape package and features the exact same tracklist per tape as the CD version does per disc. The CD tracklist would also be recycled when the album belatedly hit streaming services in September of 2020, likely because, unlike the longer cassette release, it already had a usable digital master and didn't need to have any tracks re-transferred from archival tapes, assuming any could be found in a usable condition.

Substance stands as a historically important entry in New Order's backlog. Because it contains nearly all of the band's singles between 1981 and 1987, it stands as an immediate presentation of the band's artistic evolution from a Post-Punk band in the shadow of Joy Division to the founders and codifiers of the Alternative Dance genre.

Tracklist (taken from the cassette version):