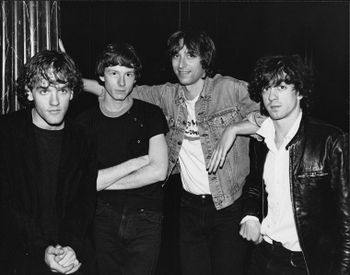 "We are R.E.M. and this is what we do."note L-R: Michael Stipe, Mike Mills, Peter Buck, Bill Berry.
I believe in coyotes and time as an abstract
Explain the change, the difference between
What you want and what you need
There's the key: your adventure for today
What do you do between
The horns of the day?
I, I believe
— "I Believe"
Influences:Influenced:
Advertisement:

R.E.M. was an Alternative Rock band from Athens, Georgia, the same city from where The B-52s came a few years before. It was formed in 1980 when University of Georgia student Michael Stipe (vocals) met Peter Buck (guitar), who worked at a record store. They discovered that they shared a similar taste for "art-punk" acts such as Television, Patti Smith, and The Velvet Underground. This led them to form a band with two other U of G students, Mike Mills (bass) and Bill Berry (drums), who had been playing in bands together since high school. Under the name R.E.M., the band recorded the only single ever released on Hib-Tone Records, "Radio Free Europe" b/w "Sitting Still." "Radio Free Europe's" combination of punk attitude and folk-rock guitars influenced by Power Pop (especially Big Star) pretty much invented Alternative Rock as an distinctly identifiable entity and movement (not to mention a specific subgenre of it named Jangle Pop) and led to them being picked up by I.R.S. Records.

The band initially played with a "murky" style: their early albums were produced so that no one instrument was more or less prominent than any of the others - but starting with Lifes Rich Pageant, Michael Stipe began enunciating his once-mumbled lyrics more clearly, and Peter Buck's guitar parts became more prominent. Shortly after this, the band, who had previously seen high levels of critical acclaim and a lot of popularity on college radio but never really had a hit, became hugely popular. Document, the band's last studio album with I.R.S., contained the major hits "The One I Love" and the well-tossed word salad "It's The End of the World as We Know It (And I Feel Fine)". As the 1980s closed and R.E.M. found themselves increasingly dissatisfied with their music's dismal international distribution, the band had abandoned their old home of I.R.S. Records for the new, more mainstream label of Warner (Bros.) Records under the promise of total creative freedom, with the first release on the label being 1988's Green. Bolstered by the hit singles "Stand" and "Orange Crush", as well as a massive 1989 world tour, the band was by all accounts and appearances well on its way to rock stardom— something they ended up achieving just two years later with the album Out of Time and its lead single, "Losing My Religion". From then on, the once-cult hit was now an international household name.

As time went by the band was plagued by personal disaster— most prominently, Michael Stipe's friends River Phoenix and Kurt Cobain respectively died of a drug overdose in 1993 and committed suicide in 1994, and longtime drummer Bill Berry suffered a brain aneurysm onstage a year later, ultimately retiring in 1997— but the band still continued on. It seems their career came and went in full circle: they began as a cult band, saw massive success, and eventually dwindled to being a cult band again. Their first five (or seven, or eight, depending on where you stand) are still considered among the best albums ever, and their last two are well-regarded as a successful comeback, so it's not as though they've been forgotten.

One notable aspect of R.E.M. was their approach to making music. Whereas most bands have a clear leader, this one was a purely democratic entity. They never did anything unless all members agreed on it unanimously, and every member contributed something to the songwriting.

The band announced their amicable breakup

on 21 September 2011, saying that they achieved everything they wanted as a band and wanted to simply call it a day. This was followed by a small press tour of Michael Stipe making it clear that there would never be a reunion. Buck and Stipe have since gone on to solo careers, with Buck also continuing his participation in various groups.

You can now vote for your favorite R.E.M. album by heading over to the Best Album crowner

Oh no, I've troped too much, I haven't troped enough: