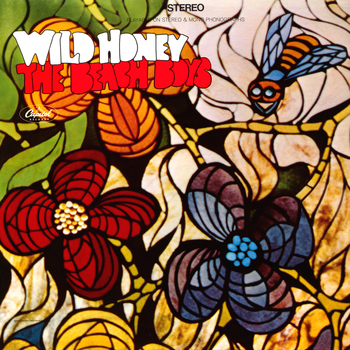 Now my heart beat, while the music was groovin' .
Advertisement:

Wild Honey is the thirteenth studio album by The Beach Boys, released in 1967. A Beach Boys album like no other before it (especially Smiley Smile), it can be credited as one of the first back-to-basics albums, coming after the psychedelic heights of earlier in the year.

Upon its release, it was greeted with mixed to negative reviews, though it spawned the hits "Wild Honey" and "Darlin'". However, it cannot be denied that this album has been Vindicated by History, mostly by critics in particular. In 2012, Rolling Stone magazine ranked Wild Honey at number two on its "Coolest Summer Albums of All Time" list, praising its "hedonistic rock & roll spirit", "humour" and "pensive depth".