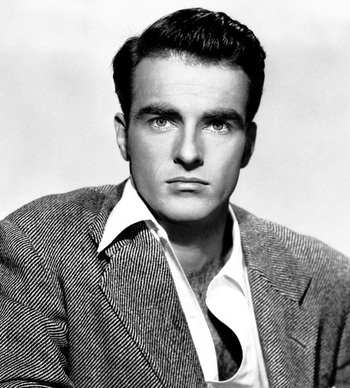 He really was handsome!
Advertisement:

Edward Montgomery Clift (October 17, 1920 – July 23, 1966)— yes, that was his real name — was one of the most prominent actors in Hollywood in the 1950s. He was known for playing sensitive, brooding young men and tortured loners in an era where most leading men were avatars of square-jawed machismo. He was one of the pioneers in bringing Method Acting to American movie screens, along with his contemporary, Marlon Brando.

He was born in Omaha, Nebraska, son of a banker. The crash of 1929 led to the family moving to New York, and while in his teens Clift started acting on the stage. He soon became very prominent in the New York theater scene, with several prominent parts, including starring roles in Pulitzer Prize-winners The Skin of Our Teeth and There Shall Be No Night.

In 1945 Clift moved to Hollywood. His first film was Red River, which matched him up with his antithesis John Wayne, but which wound up sitting on a shelf for two years. Thus his first film to be released was The Search (1948), in which he stars as a GI in occupied Germany who looks after a refugee little boy. It was a hit, and Red River, which was finally released that same year, was an even bigger hit. Clift became an instant movie star. Next came The Heiress, which paired him up with Olivia de Havilland (they didn't get along) and which was another critical smash.

Perhaps Clift's greatest role came in 1951 with A Place in the Sun, in which he plays hungry Social Climber George Eastman. From Here to Eternity (1953) earned him his third Best Actor nomination in six years (he eventually went 0-4 at the Oscars).

On May 12, 1956, Clift's life was changed forever when he crashed his car after leaving a party at Elizabeth Taylor's house. Taylor made it to the scene before the paramedics did and pulled a tooth out of Clift's tongue to save him from choking to death on it. Still, Clift was badly injured, suffering severe facial lacerations which destroyed his pretty-boy good looks. Worse, the pain from his injuries led to drug addiction and alcoholism which rapidly aged him. His alcoholism and deteriorating appearance caused the movie parts to start drying up, although he still starred in the acclaimed Wild River (1960) and had a memorable one-scene supporting role as a mentally challenged victim of Nazi persecution in Judgment at Nuremberg (1961). A lawsuit from Universal over his behaviour making Freud: The Secret Passion go over budget didn't help matters; while he was able to provide plenty of evidence that filming ran over because he suffered an on-set accident that left him with cataracts, and the case was settled in his favour, but the narrative of him being troublesome and unreliable was set. Even his Oscar nomination for Judgment at Nuremberg was overshadowed by the belief that he'd had a nervous breakdown and the cameras just captured confused improv (a 2018 documentary by his nephew revealed it to be just acting, according to pages of dialogue he'd rewritten). He made only one film in the last four years of his life before dying in 1966 of a heart attack brought on by substance abuse.

His sexuality was long a matter of speculation. Taylor, who called him her closest friend and confidant, stated that he was gay. Taylor also said, "Monty could've been the biggest star in the world if he did more movies." He reportedly turned down starring roles in East of Eden and Sunset Boulevard.

The Clash's song "The Right Profile" (from 1979's London Calling) is about him, as is R.E.M.'s song "Monty Got a Raw Deal" (from 1992's Automatic for the People). West Side Story fans can also thank him for the show's existence; he was dating Jerome Robbins at the time and suggested one evening to make a musical that was Romeo and Juliet with New York gangs.