Film / Indiscretion of an American Wife 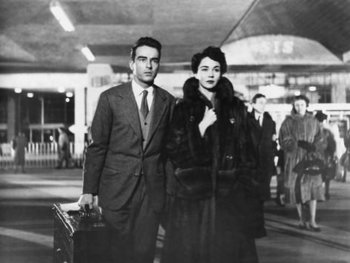 Mary Forbes (Jones) is a housewife and mother from Philadelphia, visiting her sister in Rome. When she meets Giovanni Doria (Clift), an Italian-American professor who's returned to the old country to teach, she falls for him and they begin an illicit affair. Feeling guilty and unable to continue, Mary makes plans to travel to Paris by train (and from there return to America), but Giovanni intercepts her at the railroad station and declares his love for her. The couple spend the remaining time prior to her train's departure together, and Mary must decide whether or not she's really prepared to break things off with her paramour.

Exists in two versions. De Sica turned in a 90-minute cut. Selznick, whose producing career was circling the drain by this point, chopped it down to 64 minutes and inserted some new footage.