Theatre / There Shall Be No Night 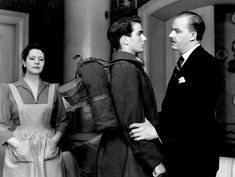 There Shall Be No Night is a 1940 play by Robert Sherwood. It is set in Finland, before and during the 1939-1940 Winter War between Finland and the Soviet Union.

Nobel Prize-winning Dr. Kaarlo Valkonen and his American wife Miranda believe that Finland, far to Europe's north, isn't threatened by the storm clouds gathering in Europe in the late 1930s. Kaarlo, who served in the army of Tsarist Russia in World War I and admires the Bolsheviks, refuses to believe that the Soviets will attack Finland. When war does come, Kaarlo and Miranda try to prevent their young son Erik from joining up, but he does anyway, joining the elite Finnish ski troops. Kaarlo winds up serving as a medical officer, but when things start getting desperate later in the war, he is pressed into combat.

20-year-old Montgomery Clift, who would go on to be a major movie star, was in the original cast, as Erik.