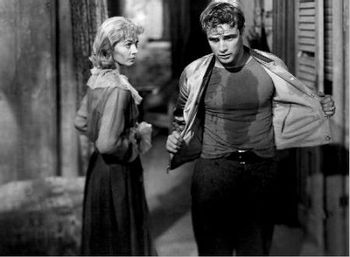 Blanche disapproves of Stanley's manly shirt sweat.
"In the age of Calvin Klein's steaming hunks, it must be hard for [younger audiences] to realize that there was ever a time when a man was nothing but a suit of clothes, a shirt and tie, shined leather shoes, and a gray, felt hat. [...] In 1947, when Marlon Brando appeared on stage in a torn sweaty T-shirt, there was an earthquake; and the male as sex object is still at our culture's center stage."
— Gore Vidal
Advertisement:

Most people are familiar with the 1951 film version directed by Elia Kazan and starring Vivien Leigh, Marlon Brando, Kim Hunter, and Karl Malden, which was of course Oscar-tacular.note Although the best remembered performance — Marlon Brando as Stanley Kowalski — was passed over on Oscar night in favour of Humphrey Bogart in The African Queen. But there have been many other adaptations, including a 1995 Made-for-TV Movie starring Alec Baldwin and Jessica Lange, an opera, and even a ballet. Stuffed full of imagery and complex characters, Streetcar is often considered Williams' greatest work, and the character of Blanche is regarded by many as the most difficult female role in all of English literature.

The plot revolves around Blanche DuBois — a beauty in her youth who has now begun to fade — coming to stay with her pregnant sister Stella in New Orleans. Blanche has lost the women's ancestral home, Belle Reve, due to the financial strain of caring for their dying relatives, and has quit her job as a school teacher due to her nerves. When Blanche meets Stella's husband, Stanley Kowalski, the two develop an almost instant mutual dislike; Blanche finds Stanley vulgar and common, while Stanley hates Blanche's continual snobbery, despite the fact she is now just as poor as they are. He is also suspicious of his sister-in-law, thinking that Blanche may have cheated Stella out of her share of the inheritance.

Note: The title of the movie refers to old buses used for public transit, streetcars, what we now call "light rail" or "trams." They were usually named for the street they ran on, and one of New Orleans' streetcars ran along a street named "Desire." It probably sounds more exciting than "A Streetcar Named Broadway," "A Streetcar Named 42nd Street," or, for that matter, "A Tram in New Orleans."