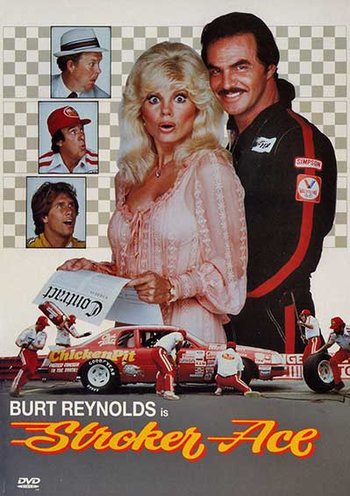 On the left from the top: Clyde Torkle, Lugs, and Audrey-sorry, Aubrey James. In the center: Pembrook Feeney. Behind her: Stroker Ace and his moustache.
"Screw second."
Advertisement:

The movie follows the eponymous Stroker Ace (Reynolds), a driver with a big ego who finds himself in a complete mess when Clyde Torkle (Ned Beatty), the charismatic and manipulative owner of the Chicken Pit fried chicken franchise, takes advantage of Stroker's need for a sponsor and forces him to sell the Chicken Pit to NASCAR enthusiasts in increasingly humiliating ways. Stroker, along with Lugs Harvey (Jim Nabors) and Pembrook Feeney (Loni Anderson), now have to find a way to make Torkle fire Stroker before Stroker gets fed up enough to quit and be unable to race for the next three years. (It's in his contract.)