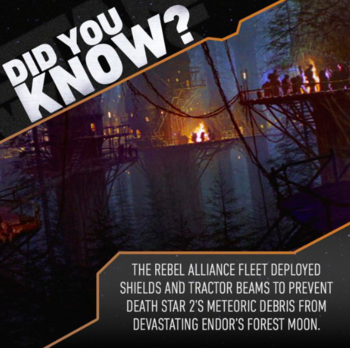 Well, that's convenient!
Robin: Casualties?
John: None, so far. But we've never actually found a casualty at a Hulk site before, so I guess we shouldn't be surprised.
Robin: No deaths? Incredible.
John: I've always felt it's best not to dwell on these things.
— Damage Control on the lack of fatalities in The Incredible Hulk's rampages
Advertisement:

Explosions are cool. So are giant objects. Therefore, giant objects exploding are extremely cool, but let's think about this for a moment. Halt the Attack of the 50-Foot Whatever in a major city by blowing it up. Or just kill it and let it fall over, for that matter. That's going to do some monstrous damage to the city. Yet any collateral damage or casualties are depicted as minimal. Either we cut to credits before we see any aftermath, or (more blatantly) we see that there was no collateral effect at all. If there are, they are just Conveniently Empty Buildings.

Why? You can't have the heroes take down the alien spacecraft For Great Justice, only to look sheepish when the flaming debris flattens the city. Not in any show on the idealism end of the scale, anyway. Maybe they have a brilliant plan to lure it somewhere uninhabited before they blow it to rubble, but surprisingly often, it's just not something the writers concern themselves with, leading viewers to notice the Inferred Holocaust.

If you're a hero, you needn't worry about this. Even if there is collateral damage, your Hero Insurance is going to cover it. If not, then Hilarity Sues.

See Colony Drop for when a large man-made object is deliberately dropped on top of a planet in order to cause a massive impact. The Trope Namer is the fan theory about the destruction of Endor as a result of the detonation of the Death Star in Return of the Jedi (see Film section below). (And not the Ender Holocaust, which is about the opposite.)

Compare There Are No Global Consequences and Never Say "Die". Inferred Holocaust is when you realize the Monster of the Week might be dead but chances of survival are grim after the extensive damage.

open/close all folders
Anime and Manga
Comic Books
Fan Works
Film — Animation
Film — Live-Action
Literature
Live-Action TV
Video Games
Web Animation
Webcomics
Western Animation
Real Life
"I was worried for a second that it'd be one of those sad stories that you have to pull some sort of depressing meaning out of. No thank you!"