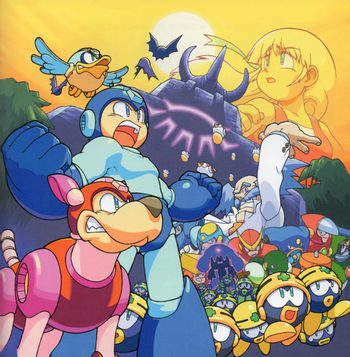 Super Adventure Rockman is a Japan-only Interactive Movie in the Mega Man franchise, specifically the classic series. It was released for the Sega Saturn and PlayStation.
Advertisement:

Dr. Wily has uncovered an ancient alien supercomputer, Ra Moon, hidden in the ruins of the Amazon. He uses it to revive his Robot Masters from Mega Man 2 and Mega Man 3. The ruins are capable of causing almost all of the machinery and electricity in the world, including robots, to shut down. Roll is quickly affected, so Dr. Light immunizes Mega Man and his brothers and sends them to stop Dr. Wily before it's too late.

Notably Darker and Edgier than the rest of the classic series, it was disowned by Keiji Inafune and Capcom as a whole. It is perhaps for this reason that the game was never released outside of Japan, or get acknowledged in any official materials until the adaptation in Archie Comics' Mega Man. Translations of the game's cutscene portions are also available online

The game is also notable for being one of the very few times that Dr. Wily isn't the final boss.