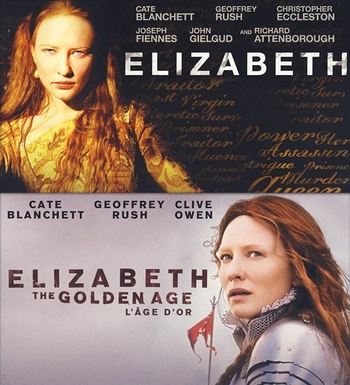 "Observe, Lord Burghley. I am married... to England."
— Elizabeth
Advertisement:

A 1998 British Biopic about the early life of Queen Elizabeth I of England, starring Cate Blanchett in the title role along with Geoffrey Rush, Christopher Eccleston, Joseph Fiennes, John Gielgud, and Richard Attenborough.

It broke the usual "period piece" mould of English biographical pictures in that it was directed by an Indian, Shekhar Kapur, took a much more dramatic style of storytelling, and didn't shy away from some historical truths of the era, such as dirt, poverty, and torture.

Followed by a 2007 sequel, Elizabeth: The Golden Age with the same director and Cate Blanchett once again as the Virgin Queen.