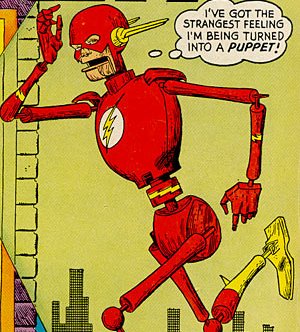 What... exactly does that feel like?
"I do not have puppet cancer!"
— Puppet Angel, Angel
Advertisement:

Sometimes, something strange happens. A person, either the hero or villain, changes into a living puppet. Attempts to manipulate the newly-formed puppet often result in violence.

This is often the work of an Evil Puppeteer, turning innocent people into puppets to use at his leisure.

Could be a Baleful Polymorph. Compare to Demonic Dummy or People Puppets. Subtrope to Toy Transmutation.