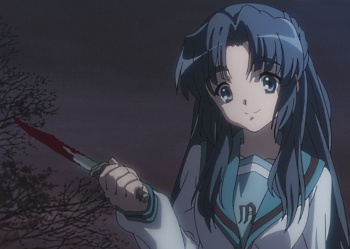 I just, like, stabbed some loser to death.
Advertisement:

She's cute. Beautiful, in fact. Friendly and popular. She's the head of the class in terms of looks, money and everything that counts for her approval rating, but she's not the Alpha Bitch, even if she has a Girl Posse or the entire grade on her side. One of Those Two Guys might have a crush on her, even though he never gets anywhere. She's the perfect girl...

...except there's something not quite human about her, and she's secretly out for your blood.

The Uncanny Valley Girl is smarter than she lets on, and puts on a very convincing persona that's made the class adore her. It's the high school girl version of Villain with Good Publicity, except the publicity is good enough that nobody, not even The Hero, knows she's the villain — or anything other than normal. Not until she comes at you with a sharp object, that is.

Sub-Trope of Nothing Nice About Sugar and Spice.

Compare Yandere, Cute and Psycho, Deceptively Human Robots, Stepford Smiler, Living with the Villain, Dark Magical Girl, Faux Affably Evil, and Bitch in Sheep's Clothing. Contrast Alpha Bitch, Fallen Princess, Loners Are Freaks. In extreme cases, she may be a Humanoid Abomination. Note that the Uncanny Valley Girl doesn't have to be evil — she could also be very misunderstood or Creepy Good — but a lot of work will have to be done to reconcile the apparent contradiction for the story.

Note that the focus is on the words "Uncanny Valley". The "Valley Girl" part is Just for Pun.