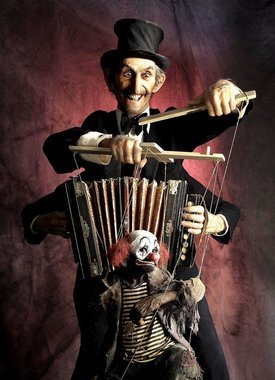 "The Puppeteer" by sculptor Thomas Kuebler.
Puppet Chorus: Get in line, stay in time
Kaos called, it's time to shine!
The puppets dance, in her trance!
Mesmeralda: You never really had a chance! I'm the one who pulls your strings!
— Mesmeralda's Villain Song, Skylanders: SWAP Force
Advertisement:

For many years, people have been disturbed by the lifelessness of puppets and dolls, and the fear of these toys coming to life has led to tropes such as Perverse Puppet and Demonic Dummy. In turn, some are fascinated or horrified of the people who control said puppets, and as a result, many puppeteers and ventriloquists in fiction will be bad guys.

Another factor in the negative portrayal of puppeteers is the idea of People Puppets - having another person literally pull you around with strings. Some evil puppeteers may even perform Puppet Permutation: the act of turning people into puppets.

Another reason why puppet masters may be portrayed as bad guys is because of the symbolism that they inspire. The way a puppeteer controls a puppet is easily comparable to someone manipulating others socially. The mastermind behind a gang or conspiracy is often referred to as "the one pulling the strings", and the image of a hand holding a puppet control bar is usually used to indicate power and control.

If an evil puppeteer is a Funny Animal, then he or she may be a spider, due to a spider's silk resembling a puppet's strings.

May be a Marionette Master or a Living Doll Collector.