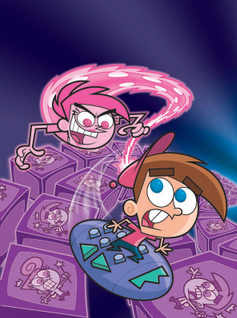 The second Fairly OddParents Made-for-TV Movie, and the first one to feature Vicky as the main antagonist. A love letter to all of creator Butch Hartman's favourite television programs and then some, the movie premiered during the show's fourth season, on July 23, 2004 in the United States. It stars the main voice cast, with Alec Baldwin guest-starring as a mysterious masked man.

Timmy Turner has recently developed a huge obsession with television, watching every show under the sun and using Cosmo and Wanda's magic to imitate the various gadgets and situations seen on the idiot box. At the same time, Timmy is also getting fed up with his parents not believing him about Vicky. A feeling of growing anger and despair that only escalates once his fairies inform him that they won't always be around; eventually, Timmy is going to get older and lose his sense of childlike wonder and innocence, and will eventually believe all his adventures were just his imagination running wild, resulting in his fairy godparents finally leaving him.

After another incident involving Vicky and a wish-gone-wrong leaves him waiting in his room to be yelled at by his parents once they get back from the ammo store, he decides that with Cosmo and Wanda's magic, he can run away into television. This way he won't have to deal with Vicky and, due to the Floating Timeline nature of most shows, he won't age and thus won't risk losing Cosmo and Wanda: a win win. Unbeknownst to Timmy however, as a result of that same incident, Vicky also gained the ability to enter the world of television herself. And she has the more pragmatic goal of using The Biographical Channel so she can rewrite history itself and become an all-powerful dictator. And unbeknownst to her, our buck-toothed protagonist and his fairies are running from show-to-show in order to escape a mysterious masked assassin, sent from the dystopian future Vicky will soon create. And unbeknownst to all of them, Timmy's parents are searching desperately for their son back in the real world and are beginning to realize the truth about Dimmsdale's go-to babysitter thanks to the mysterious Deep Toot.

The following shows were featured in this movie:

This film provides examples of the following Tropes: