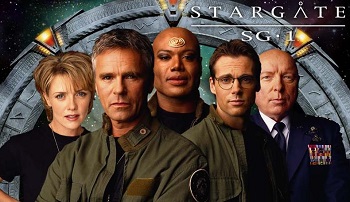 Stargate SG-1 is a Science Fiction television series (1997-2007) following the Stargate movie in a Broad Strokes fashion. It focuses on the adventures of the U.S. Air Force's primary exploration and First Contact team, designated SG-1, as they travel through a wormhole to alien planets. The series dealt heavily with the Egyptian-mythology base of the original film, but as the series progressed it expanded to cover other mythologies and different alien threats and allies. This series is responsible for the elaborate expansion of the Stargate-verse.

The Stargates are a Portal Network left behind by Precursors: dial the code for the planet you want to visit, step into the gate, and emerge moments later from an identical gate on the other side of the galaxy. As SG-1 explores other worlds they find that All Myths Are True, at least in the form of Ancient Astronauts. Their primary foe throughout the series is the Goa'uld, a race of Puppeteer Parasites who were worshipped on Earth as the Egyptian Gods.

As the protagonists are primarily modern-day Americans, Stargate's earthling characters rarely suffer from Genre Blindness. The main characters are very aware of the trappings of science fiction, and are not afraid to show it.

Lasting for 10 seasons, it was the longest-running single Sci-Fi show in US history and is only surpassed worldwide by Doctor Who and Super Sentai.note Smallville has five more episodes than SG-1, but YMMV on its genre. Despite the constant threat of cancellation from the 6th season on, and the fear of each Season Finale supposedly being the last, it came as a surprise when the show was not renewed for an 11th season almost immediately after it broke the previous American length record held by The X-Files (later taken by Supernatural in 2016). Two full-length DVD movies have been made (Stargate: The Ark of Truth and Continuum). A third and final SG-1 film — Stargate: Revolution — was planned, but was ultimately canceled following Stargate Universe under-performing.

2013 has seen the release of an iOS game, Stargate SG-1 Unleashed, featuring the voices of the surviving original cast.

"These and other clichés will be available to you all for one more day of training with me. After that, you'll either be assigned to an SG team... or not."
Feedback

Jack O'Neill activates the Ancient Weapons platform hidden in Antarctica just in time to save the Earth.

Jack O'Neill activates the Ancient Weapons platform hidden in Antarctica just in time to save the Earth.