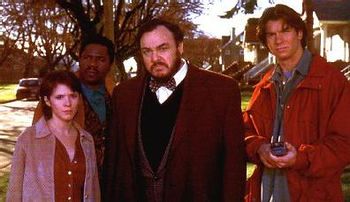 The cast members of seasons one and two, looking at something awful happening off-camera.
"What if you could find brand-new worlds, right here on Earth, where anything is possible? Same planet, different dimension. I've found the gateway!"
— Quinn Mallory, first season Opening Narration
Advertisement:

Sliders (1995-2000) is a Science Fiction series created by Robert K. Weiss and Tracy Tormé that ran on Fox for three seasons and then on the Sci-Fi channel for the following two.

The main character is Quinn Mallory (Jerry O'Connell) , a Brilliant, but Lazy physics student/part-time computer store clerk on a personal quest to invent an anti-gravity device. One day, his project takes an unexpected turn when his device creates a dimensional wormhole instead. After testing it out by sending in inanimate objects, he decides to try crossing it himself. He finds himself in an Alternate Universe, which looks like his own, but isn't: traffic codes are different, the planet is in danger of global cooling, and Elvis Presley is alive. The countdown on his device reaches zero, and Quinn is immediately taken back to his own world.

Upon his return, Quinn realizes a double from a parallel universe has taken his place in the meantime and sent his life in turmoil by telling off his physics professor Maximillian Arturo (John Rhys-Davies), hitting on his coworker and platonic friend Wade Welles (Sabrina Lloyd) and getting him fired. The double then reveals himself to Quinn and explains parallel universes. Before leaving, he starts giving Quinn a warning about his timing device, but doesn't finish before he is taken back. Enthusiastic about his discoveries, Quinn offers visiting Wade and Professor Arturo to take them on a tour to a parallel world, but fearing the wormhole wouldn't be able to hold three people, powers it up too much, leading it to suck in not only Quinn, Wade and Professor Arturo, but also Rembrandt Brown (Cleavant Derricks) , an R'n'B singer passing by his house on his way to sing the National Anthem at a baseball game.

The foursome find themselves on a frozen world, with eight hours left on the timer. With a tornado approaching, Quinn activates the timer early, which erases his home world's coordinates and sends everyone to yet another parallel world, exactly what his double was trying to warn him about. From this point on, the four travel (or "slide") randomly across the multiverse, trying to find a way back home.

It began as an Adventure Series revolving around Alternate History scenarios ("What if the US lost World War II? What if dinosaurs didn't go extinct? What if you were born the opposite sex?", etc), but Executive Meddling eventually cost the show its creative force, Tracy Torme, which led to the less-inspired episodes that borrowed heavily from popular movies. The show eventually started a Myth Arc revolving around the Kromaggs.

Over the years, the series has been slowly released on DVD. Season 5 was finally released January 2012.