Gave Up Too Soon 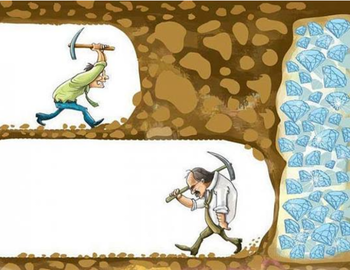 So close.
"Whatever he says, let his inner resolution be not to bear whatever comes to him, but to bear it 'for a reasonable period' — and let the reasonable period be shorter than the trial is likely to last. It need not be much shorter; in attacks on patience, chastity, and fortitude, the fun is to make the man yield just when (had he but known it) relief was almost in sight."
— Screwtape, Letter 30
Advertisement:

A situation in which the characters are using the right method, at the right location, for the right motivations. Success is just around the corner... but the characters tire of what they're doing and either depart or change their tactics. Had they only persisted, they would have succeeded. Examples include: characters waiting for somebody or something that arrives seconds after they give up waiting and depart; characters who dig in the right spot for a treasure but give up before digging deep enough; or, more grimly, characters who attempt a Taking You with Me or Last Stand and are wiped out just before help arrives. Also frequently occurs when two characters are searching for each other. (In Real Life, the lost are often advised to stay in one place to avoid this trope.) Although it occurs in all genres, Gave Up Too Soon is most prominent in farce and horror.

Basically, this trope is a deconstruction of Know When to Fold 'Em and a subversion of Sunk Cost Fallacy, but it often comes off as a particularly cruel form of Finagle's Law; as if the universe itself makes sure you can never reach your goal unless you decide to give up, in which case it will always be within reach.

In cases where it is used to ironic effect, expect The Reveal to the audience that whatever the characters failed to achieve was Real After All.

Contrast You Were Trying Too Hard, Just in Time. Compare Never Recycle Your Schemes, where the bad guy comes oh-so-close but never tries the tactic again despite near-success.