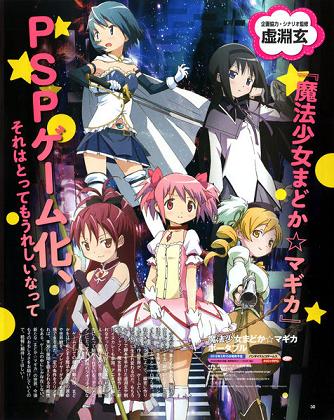 Puella Mamam...... Pulla Maga... Plama Maka... PMMM Portable is a Licensed Game for Puella Magi Madoka Magica. It was released on the PSP March 15th, 2012, and was published by Namco Bandai. It has heavy involvement from the anime cast; Gen Urobuchi is supervising the scenario, while Studio SHAFT and Gekidan InuCurry are providing visual designs.

The game is part first-person Roguelike dungeon crawler and part Visual Novel. The player controls the magical girls while they navigate witches' labyrinths and fight off familiars. In between dungeons, the choices made by the player can affect the characters' fighting abilities and alter the anime's story. For example, it is possible to change the events of Episode 3. The player can select commands for both Kyubey and Homura and play from the viewpoint of both characters.

The game is notable for including a number of elements absent from the anime, such as a Transformation Sequence for Madoka and witches that were only mentioned on the anime's website.

A Fan Translation project has been previously initiated by TRADUKO Soft

, but the team has disbanded. A second Fan Translation has been started by GBATemp user Carlitos and is available on that site; he has currently translated Madoka and Mami's routes and the first nine days of Sayaka's route.

In December 2013 an Actionized Sequel of sorts was released for the PS Vita. Entitled Puella Magi Madoka Magica - The Battle Pentagram, it re-uses many of the same elements as Portable but trades the Roguelike gameplay for Hack and Slash.

Late-Arrival Spoiler Warning: This page will contain unmarked spoilers for Puella Magi Madoka Magica.
Advertisement:
Avoiding this page is highly recommended for those who haven't seen the show.