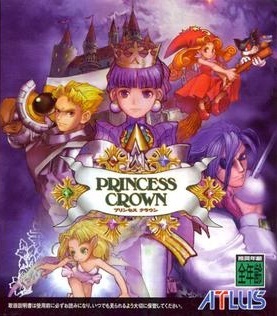 Princess Crown is an Action RPG created by Atlus and co-developed by SEGA, it's the first game created by the team that would become Vanillaware, the creators of Odin Sphere and Muramasa: The Demon Blade (In fact, these games were once referred in-development as Princess Crown 2 and Princess Crown 3, respectively). It was released on December 11, 1997 for the Sega Saturn. An Updated Re-release was launched for the PlayStation Portable on September 22, 2005. Aside from an added art gallery and some minor quality of life changes, it has the same content as the original version. Another Updated Re-release was released for the Playstation 4 as a Pre-Order Bonus for 13 Sentinels: Aegis Rim. Both the original version and its re-releases were never released outside Japan, though an English Fan Translation of the original Sega Saturn version is currently in development.

A little girl picks up a book and asks her grandmother to read it. The grandmother gladly accepts and begins to tell the story of our protagonist, the Princess Gradriel De Valendia. She has recently ascended to Queen of Valendia after her mother's passing, and after listening to her people's pleas, decides to sneak out of her castle with her new Fairy Companion to solve all of the problems on her own (much to her advisor's chagrin). But what the young Queen doesn't know is that the children-kidnapping witches and rampaging dragons are just the tip of the iceberg, and that some great evil is trying to return.

The gameplay is typical for an Action RPG: you guide Gradriel across her country in side-scrolling fashion by running from town to town dealing with monsters on her way, gathering information in towns and key locations and fighting many bosses. Combat occurs in the same pathway, and you must fight your enemies one-on-one (or one-on-many) to keep moving forward. You can attack, move, block, evade, use items, and perform some special moves, but here's the catch: moving, blocking, and attacking drains your stamina (known here as ''POWER'), and if it reaches zero, Gradriel can't take any defensive action and is vulnerable until the POWER meter recharges. So balancing attack, defense, and recharging your POWER meter is crucial to winning most of the encounters (especially the Boss fights). The storyline is pretty linear, with some sidequests to find special objects or making a boss fight easier.

Despite the gorgeous sprite artwork and innovative (but difficult) gameplay, Princess Crown didn't sell too well (according to creator and producer George Kamitani), and although it did have a reprint on the "Sega Kore" (Sega Collection) label, physical copies of this game are still very rare.

FALL DOWN FROM THE TROPEWORLD