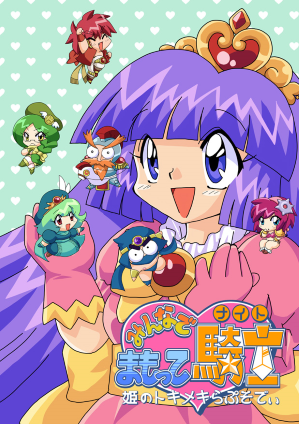 Princess Lola's misfit ensemble of heroes protecting her and Magicadia.Who? Counter-clockwise from the top: Fighter, Archer, Old Guy, Mage, Ninja, and Amazon.
"Save me... my hero! Defeat f$%kin' goblins!"
— Princess Lola during the introduction sequence
Advertisement:

Protect Me KnightJP (まもって騎士, Mamotte Knight) is an indie Tower Defense game by Yuzo Koshiro's team of game developers at Ancient with Yuzo composing the game's music. The game pays homage to the classic 8-bit days of gaming with NES-styled visuals and MIDI chiptune music. The game's start-up sequence even has the player attempting to get the cartridge to work by blowing into it (you however can skip this sequence to avoid any frustration of getting into the game).

The premise is simple: Pick one of four character classes — the Fighter, the Mage, the Amazon, or the Ninja — and protect your cute, happy-go-lucky Princess from harm as you escort her back to her castle at Kingdom Magicadia. The problem: everything is trying to kick her cute little butt. All sorts of enemies, from goblins, zombies, minotaurs, demons, and even mischievous succubi, will have at you for defending the Princess. If that wasn't enough, dragons, giant lizard men, and other bosses will show up on occasions to stomp down anyone and anything in their path. Luckily, our brave heroes can fight off these enemies with their weapons of choice and special abilities, and by spending Love Points, they can unleash a wide-area attack. Unlike other tower defense games, players can also move the Princess out of harm's way and to set up barricades in exchange for Love Points around her if things way out of hand. Up to four players can either participate in the Arcade Mode where they advance through progressively difficult stages and use the leftover Love Points to level up their hero's abilities, or the Survival Mode to test their ability to withstand an endless wave of enemies.

A sequel called Protect Me Knight with Everyone: The Princess' Heart-throbbing RhapsodyJP (みんなでまもって騎士 姫のトキメキらぷそでぃ, Minna de Mamotte Knight: Hime no Tokemeki Rhapsody) was released for the Nintendo 3DS in Japan on September 2014. After the Princess was rescued thanks to the efforts of the Gotta Protectors, a mysterious new threat emerges to threaten the realm of Magicadia. The game expands on the gameplay elements of its predecessor, introduces two new characters, Old Guy and Archer, features the ability to share and play user-created maps through QR codes, and post-release DLC such as an alternate FM synth soundtrack and M.S.S Project collaboration expansion. On July 28, 2016, it was localized in North America under the name of Gotta Protectors with the FM soundtrack DLC. On September 7, 2017, to celebrate the three year anniversary of the Japanese release of the sequel, an "auto runner" mini-game called Gotta Protectors: Amazon's Running DietJP (みんなでまもって騎士 アマゾンのダイエット大作戦, Minna de Mamotte Knight: Amazon no Diet Daisakusen, EN: Protect Me Knight with Everyone: The Amazon's Great Diet Strategy) was released for free on the sequel's Japanese page

note (Links to the downloads for both English and Japanese versions are near the bottom of the page), in the form of .NES files which can be used in Famicom/NES emulators.

A third installment, known in Japanese as Susume!! Mamotte Knight: Hime no Totsugeki Serenade (すすめ！！まもって騎士 姫の突撃セレナーデ) was released for Nintendo Switch on October 10, 2019, with an English version released on April 14, 2022 release under the name Gotta Protectors: Cart of Darkness. The gimmick this time around is that the Princess's castle has become mobile due to being placed on a railcart, and the Gotta Protectors must protect the castle as it traverses the tracks in a collision course with the enemy fortress. It streamlines the gameplay elements introduced in the previous game while promoting Lola's brother Prince Mars and the Oracle as playable characters. Post-release DLC packs this time around not only gave players even more retro soundtrack options, but also includes their own bonus scenarios and additional skill sets for certain characters.

The Protect Me Knight series provides examples of: