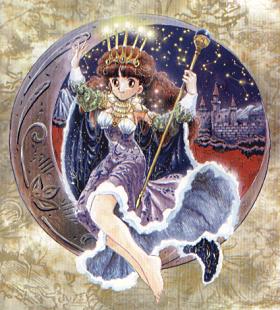 Princess Maker is a series of videogames made by Studio Gainax.

The games are mostly Raising Sim and Dating Sim merged together, with some of the installments having some RPG Elements thrown into them in various degrees. Each game begins with the player taking on the role of an adoptive parent for a young girl, with the task being to raise her from childhood to adulthood.

The player sets up a schedule that decides on what the daughter will do for the next week, be it getting an education, working a part-time job to earn some money, or resting to give her some time to relax from the former. Some games also give the option to venture out into areas that tend to include battle. The results of the schedule influence her parameters and reputation, with the final parameters leading to an ending that can be absolutely adorable or Nightmare incarnate.

The series was rather obscure outside of Japan for a very long time, due to the series lacking official, English localization for a good twenty years. An attempt to release a PC version of Princess Maker 2 succeeded in a completed release, but it was never officially sold because the publisher went out of business.

In 2016, Korean publisher CFK Co. made a surprise release of Princess Maker 2 Refine on Steam in Japanese, Korean, and English, with the last having a new English script. Shortly after, the first and third game were localized in 2017, with the fifth and final game released in 2018. This led to the once-obscure franchise becoming more widely-known in the West, with four out of five titles released within two years.

See Petite Princess Yucie, which is an anime based on the

Princess Maker series, and Long Live the Queen, which is an even darker take on this concept.

The Princess Maker series, or multiple entries of it, or the games that don't have pages, provide examples of