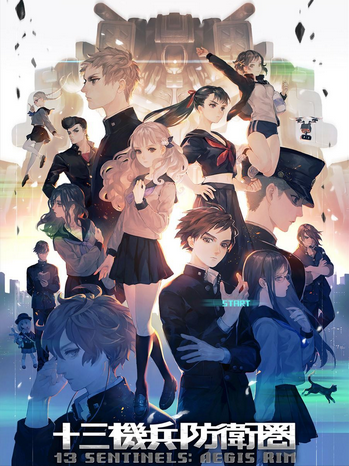 "It's really happening... Just as you said. A kaiju attacked, like in that movie. So we'll do what we have to do. Get in the robots and fight. Our fate was sealed a long time ago."
— Juro Kurabe
Advertisement:

13 Sentinels: Aegis Rim is a Visual Novel Adventure Game with Real Time Tactics gameplay segments developed by Vanillaware and published by Atlus. It was first teased in a preview video in July 2015 as a collaboration project between Atlus, before being finally revealed in the 2015 Tokyo Game Show. The game was released for the PlayStation 4 on November 28, 2019 in Japan. A playable demo was released on March 14, containing the game's first three hours. It was released overseas on September 22, 2020 with EFIGS support and an English dub.

A Nintendo Switch version was released on April 12, 2022. This is notably the first time a Vanillaware game has been released on non-PlayStation hardware since Muramasa: The Demon Blade's original release on the Wii in 2009.

In 1980s Tokyo, thirteen high-school students from Sakura High School are thrust into a mysterious series of events spanning from the 1940s all the way to 23rd century, all of which involve humanity's future demise at the hands of a massive invasion from aliens known as the Deimos. The story is told from the individual viewpoints of the thirteen characters. As the thirteen students unravel the mysteries surrounding their involvement and the fight against the Deimos, they'll soon discover the secrets that shape them, the world as they know, and their destiny.

Unlike the developer's previous effort, this game takes place in a more modern setting, albeit one with giant mechs. The game is directed by George Kamitani, with the music composed by members of Basiscape.