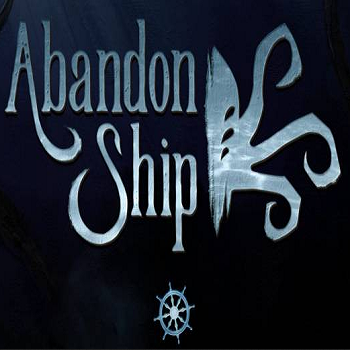 Abandon Ship is a naval Roguelike game developed by Fireblade Software. It entered Steam Early Access on February 21st, 2018 and had a full PC release on October 22nd, 2019.
Advertisement:

It is best described as a Golden Age of Sail-era version of FTL: you have the sector-by-sector exploration, one-on-one ship duels where you target each other's vulnerable spots, random events resolved through text and a menacing threat that'll come after you if you spend too long in one sector. Here, it's a massive Kraken, which is powerful enough to be worshipped by a cult that makes up the primary power in the world. Your captain has rebelled at the start of the story, however, and must now find the way to slay the kraken to break the cult's stranglehold over the world.

Compare to Convoy for a Post Apocalyptic take on the FTL formula and Crying Suns for a more narrative-focused version of the same. If you are looking for a more serious and narrative-driven naval roguelike with Lovecraftian elements, check out Sunless Sea and its successor Sunless Skies.