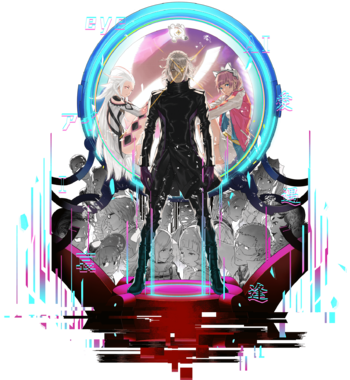 Remember, the dream world does not obey the laws of reality.
Even with the devils of time against you,
never let the fire fade in you!
See the golden goddess with wings of rainbow
set sail through the night sky to embrace you!
Resist! Allow your heart to take you!
Never let this merciless world erase you!
Passing down the light of the torch to guide you,
and you shall be bathed in light!
— The chorus of Invincible Rainbow Arrow, performed by Iris Sagan (English version).
Advertisement:
AI: The Somnium Files is an Adventure Game/Visual Novel from the mind of Kotaro Uchikoshi and developed by Spike Chunsoft. It released on September 17th, 2019 for Windows PCs, PlayStation 4, and Nintendo Switch.

The game is set in near-future Tokyo and follows Special Agent Kaname Date, a police officer working for the top-secret Advanced Brain Investigation Squad (ABIS). Together with his AI partner Aiba, Date finds himself investigating a series of gruesome serial killings, which all involve the victims having their left eye removed by the killer. Aiba's abilities allow Date to enter the dreams and memories of witnesses and suspects, where he can extract information and crack the case once and for all.

Suffice it to say, things get very complicated, very quickly.

Remember, the time limit within TV Tropes is six minutes: