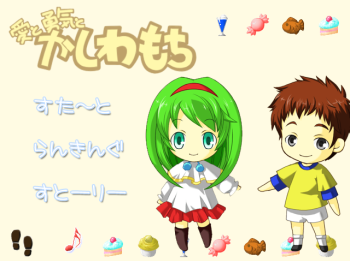 Our Heroine and her boyfriend.
Love, Courage, and Leaf-Wrapped Rice Cake in English. It's another cute little puzzle game from the maker of Irisu Syndrome!. This game features the same sort of sweet-dark plot as its forerunner, so be prepared for surprises! Many have even described it as a a crossover between Kashiwa Mochi and Irisu Syndrome! in both gameplay and plot.
Advertisement:

Ai-chan is a adorable but sick girl who loves eating sweets and being in love with her boyfriend, Yuki. But it's not as straightforward as that: Ai isn't just a typical ill girl, but something more serious. The gameplay itself is pretty similar to Yoshi's Cookie, only with a wicked difficulty curve.

The computer version can be downloaded here.

An official iOS version titled "Love Mochi" was released in 2011 and could be bought from the App Store, but it has since been removed.

A sequel of sorts, Ai to Yuuki to Kashiwa Mochi Kai (translated as Love, Courage, and Leaf-Wrapped Rice Cakes: Unexpected Meeting) was later released at a convention, with its gameplay (and storyline, if you take the most obvious interpretation) being a crossover between Kashiwa Mochi and Irisu Syndrome. As of 2011, it can be bought here

from DLsite English, along with some Maou Monogatari Monogatari artwork that was packaged with the convention version.