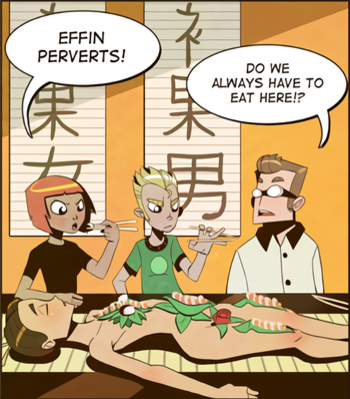 "Before becoming a living sushi platter, the person (usually a woman) is trained to lie down for hours without moving. She or he must also be able to withstand the prolonged exposure to the cold food. Before service, the individual is supposed to have taken a bath using a special fragrance-free soap and then finished off with a splash of cold water to cool the body down somewhat for the sushi."
— Jack Herbert, Japan for the Uninvited
Advertisement:

Body Sushi is the English term for nyotaimori or nantaimori. Nyotaimori or "female body presentation" comes from Japan and is the act of eating sushi off the body of a nude woman. The male version, nantaimori, does exist but it's not as common.