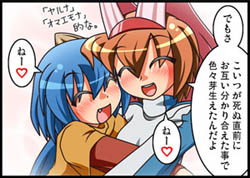 Karin-dou 4koma (菓厘堂４コマ) is an ongoing Urban Fantasy comic by Rakurakutei Ramen about crazy lesbian youkai and ancient sorceresses — and the other crazy lesbians who love them — going about their everyday lives. The starting characters live at Karin-dou, a supposed antique store.

A pair of 4koma are released on Pixiv every Saturday. Translations can be found on Danbooru; specific comic references below use their post numbers there.

This 4koma provides examples of: