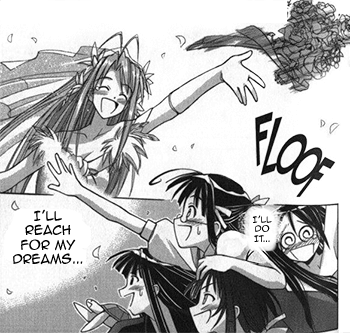 "Then came time for the bouquet toss. Or as it is to my mother, her last, best hope to match off one of her single, pathetic daughters. I didn't so much catch it as prevent it from smashing into my face. But I figured my mom probably paid off Ellen Gibson to throw it directly at me. I wonder how much my misery is worth to my mother."
— Lizzie, The Lizzie Bennet Diaries, "The Most Awkward Dance Ever"
Advertisement:

Ah, the Bouquet Toss. It's finally happening. The young couple is finally tying the knot, and now it's for real; no gatecrashers, neither one chickening out, they've finally said their vows, they've kissed, and maybe, just maybe, they'll live Happily Ever After. One thing left to do: The lighthearted tradition where the blushing bride tosses her bouquet of flowers behind her back where a group of wedding-goers cheerfully try to catch it to determine who is the next one to get married. However, in fiction, one of the following will usually occur:

The bouquet toss usually happens outside of the building where the ceremony is held, immediately after the wedding has taken place. Real-life bouquet tosses, however, are often executed as part of the reception, hours after the ceremony. 99% of the time, the bouquet toss occurs in slow motion to emphasize the importance of the event. Also, while it doesn't have the same exposure, the groom will toss the bride's garter, with similar results (though result 1 is considerably less common, as are concerns about feeling pressured to marry ASAP).

In fiction, the bouquet toss's predictive powers are almost infallible, although how this plays out depends on how much time there is left in the story. If it happens at the beginning or middle of a work, the character who caught the bouquet will almost certainly get married by the end. If the wedding is the Happily Ever After ending of the entire work, the character who caught the bouquet will probably catch the eye of someone they've had some prior romantic tension with, implying that they'll soon tie the knot.

A case of Truth in Television, but note that the traditional bouquet toss is not ubiquitous in all weddings. Some brides (especially those who belong to churches such as Catholicism and Anglicanism) elect to leave their bridal bouquets at the church at the altar, or in front of a statue of the Virgin Mary, or place them instead at a tomb, usually of a deceased family member. The latter was made famous by the late Elizabeth the Queen Mother of the UK, who placed her bouquet at the Tomb of the Unknown Warrior in Westminster Abbey, shortly after her wedding with the future King George VI. Catherine, the Duchess of Cambridge also did the same after her wedding with Prince William in 2011. In other cultures, it is customary to keep the bouquet as a keepsake in memory of the happy occasion; in cultures where the bouquet toss is common, many brides nowadays acquire a separate bouquet for tossing purposes so that they can keep their own bouquet for posterity.

SpongeBob improvises a bouquet on the fly by taking flowers and accessories from several guests so it can be thrown at Mr. Krabs's wedding. Numerous women try to catch it, but Patrick ends up swallowing it.

SpongeBob improvises a bouquet on the fly by taking flowers and accessories from several guests so it can be thrown at Mr. Krabs's wedding. Numerous women try to catch it, but Patrick ends up swallowing it.