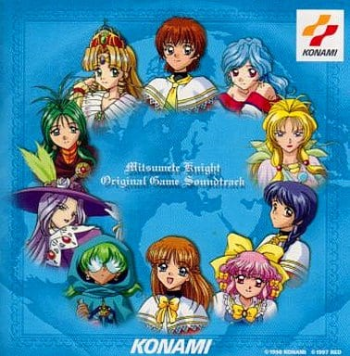 Ten of the sixteen main heroines of the game. Clockwise from the top: Hanna, Anne, Noel, Raizze, Laury, Sophia, Menesys, Linda, Claire, and Priscilla.
Mitsumete Knight (みつめてナイト, Mitsumete Naito, lit. « Admire Knight », « Gazing Knight ») is a 1997 Dating Sim on PlayStation 1, made by Konami in cooperation with Red Company. Spiritual Successor of Konami's smash hit Tokimeki Memorial : Forever with you, it uses the same game engine and most of its successful mechanics, but with several twists.
Advertisement:

First, Mitsumete Knight is set, not in a high school setting, but in an odd hybrid medieval/fantasy setting, mixing medieval-heroic diplomacy and politics with modern technology with dashes of high fantasy sprinkled in, where you play as an Asian who has emigrated to Dolphan Kingdom as a mercenary, to win the war the country is engaged against its neighbour country, the Dukedom of Procchia. Thus, your goals are twofold: gaining the "Holy Knight" title, which will open you the roads towards fame and nobility, by helping Dolphan win the war and accomplishing heroic deeds; and winning the heart of one of the local ladies you'll be meeting during the 3 years the game spans.

Second, while the dating part of the game is basically the same as in Tokimeki Memorial (meet girls, date them, please them, see special events and fight off rumors), Mitsumete Knight was the precursor of the future Tokimeki Memorial games (as it was released between Tokimemo 1 and Tokimemo 2) for an easier management of the girls, introducing several prototype ideas, the most notable being the replacement of the bombing system for a much-easier-to-deal-with Uneasiness Gauge and a MUCH lower frequency of rumor spreading. These ideas favor a more girl storyline specific challenge, a type of challenge Tokimeki Memorial 2 would focus on with great success.

Third, the stats management is slightly different as well. Unlike Tokimemo 1, your character is under a Level-up system, and your stats will only increase during one; however, this gives you more flexibility in your stats' management, as you're not limited to use one command between two level-ups, allowing you to counter-balance stat-drops of a command by using an opposing-effect command, all while retaining the stat increases of both.

Fourth, the fighting part is more elaborate than in Tokimeki Memorial. The war battles are divided in two parts: one where you command a battalion made of Cavalry, Infantry, and Archers fighting an enemy corps, in a Fire Emblem Tactical Rock–Paper–Scissors style; then, you get to fight one of the enemy Generals in a one-on-one battle. Other one-on-one fights outside the war battles will occur, so make sure to have enough HP at all times, otherwise you'll be good for spending a week at the Hospital!

And fifth and probably the most important aspect of the game, since war is a major part of the storyline, Mistumete Knight has a radically different mood compared to the Tastes Like Diabetes setting of Tokimeki Memorial. Indeed, this setting is a Crapsaccharine World, with Dolphan Kingdom ruled by xenophobic evil nobles who abide by the Screw the Rules, I Have Money! and We Have Reserves mottos; war is depicted as gloomy and a waste of human lives, and Anyone Can Die. Yes, such an unusual thing for a Dating Sim, and this is one of the game's biggest strengths: depending on the player's choices, down to the type of blood you choose at the beginning of the game, several girls and main characters can die.

The girls' storylines are often rich and story-driven, with regular Break the Cutie and sad moments, very much unlike Tokimemo; yet, despite all this, the game also has lots of funny and romantic moments. The characters have developed and complex personalities, and have a lot more interaction between them than in most Tokimeki Memorial games.

All in all, an excellent game, victim of a bad combo of Overshadowed by Awesome by the more successful Tokimeki Memorial series, No Export for You, and Widget Series. Knowledge of Japanese is pretty much needed to enjoy the rich storyline too, as the game is Japanese-only and has no Fan Translation.

For the note, Mitsumete Knight was followed by Mitsumete Knight R: Daibouken Hen, an Alternate Universe RPG game which bears more similarities with Sakura Wars than with Tokimeki Memorial, where you play as a Captain leading a Five Girl Band in a quest for a MacGuffin which would cure the King. During the quest, you'll be able to try and win the heart of one of the 5 heroines.