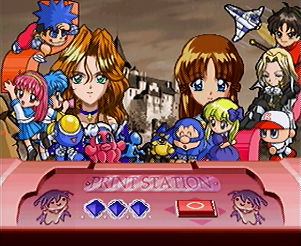 Can you recognize all Konami characters present in this Purikura sequence of this Konami game? note Counter-clockwise from top left: Goemon; Moai Head; Shiori Fujisaki, and Saki Nijino; Twinbee; Takosuke, and Koitsu; Kewne; Ebisumaru; Madoka; Powerpro-kun; Alucard; Tir McDohl; and Vic Viper. And, as an extra subtle Shout-Out, the things Goemon, Alucard and Tir are riding are the arcs of the Konami Logo.
Advertisement:
"Want to be A Winner Is You?"
— Earl, Pokémon Gold and Silver