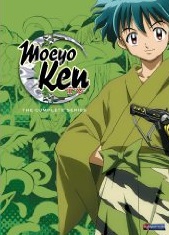 Moeyo Ken (Kidou Shinsengumi Moeyo Ken) is a four-episode OVA (later a Thirteen Episode Anime series) about the (fictional) daughters of The Shinsengumi fighting as Magical Girls in an alternate Meiji-era Japan. This series was created by Ouji Hiroi of Red Entertainment, with character designs by Rumiko Takahashi.

The Mobile Shinsengumi consists of Yuko Kondo (Isami's daughter), Toshie Hijikata (Toshizo's daughter) and Kaoru Okita (Soji's daughter).Their job is to handle any and all supernatural problems . . . with varying degrees of success. There's also Ryunosuke Sakamoto, whose mother, Oryo, is in charge of the Mobile Shinsengumi, and his bakeneko (cat demon) companion Nekomaru.