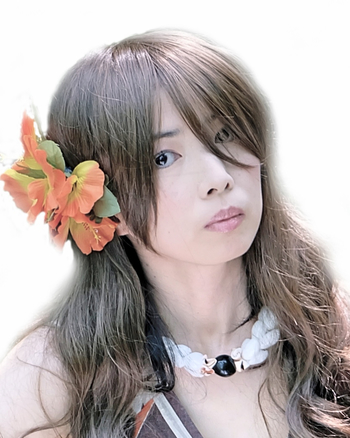 Then, in 2000, she announced that she would become a live-action actress. This, however, earned her the ire of her fellow seiyuu groups. This unfortunate event put a lot of stress on her that eventually, she ended up announcing that she retired from showbiz.

However, in 2018 and 2019, she revealed she had witnessed and experienced first-hand being mistreated and sexually harassed by her manager and other veterans in the voice acting and anime industry

, and her roles mysteriously dried up after she had spoken out against it. These incidents factor into how she eventually had to quit the scene.

Advertisement:
↑As written in various Japanese-newspaper articles, the Public Prosecutors Office built a criminal case on 23 June 2017, against one of the professional writers who have been writing slanders and calumnies, disturbing and untruthful articles from around 2000 about her work as a voice actress; the prosecuted writer was sentenced by the court for criminal penalties. This is the related Japanese newspaper article

Some of her roles include: