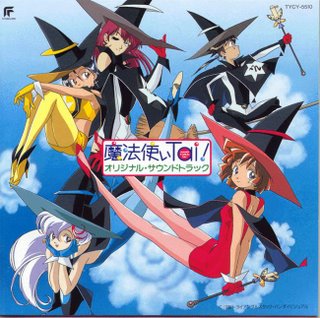 The last hope of the human race. Oh, Crap!.
"Takakura, I... I swear to become a great magician! Just... like... you!"
— Sae Sawanoguchi
Advertisement:

Magic User's Club (Mahou Tsukai Tai!) is an anime directed by Junichi Sato. It tells the story of a plucky group of teenage Magical Students, and their quest to liberate the world from extra-terrestrial invaders. It was originally released as an OVA series in 1996, and was followed in the late 90s by a tv series that picked up the story where the OVA left off. It has since received both Manga and Light Novel adaptations. The anime series was licensed in North America by Media Blasters (via their Anime Works imprint), but is now licensed by Nozomi Entertainment.

One year ago, an alien spaceship known as "The Bell" invaded the earth, spreading a message to the humans of the world that it was here to take over. Though the planet's military forces fought desperately against the The Bell, they proved to be no match for the invaders' highly superior technology. All resistance was quickly wiped out, though the aliens seemed to be taking special care not to harm the human soldiers, and The Bell never made the first strike. Quickly realizing that the aliens would not attack without provocation, humanity quietly accepted defeat and sought to return to as normal a routine as possible.

Now, the people of earth have grown used to the The Bell, which has caused no further disruptions save for sending out probes to politely observe their day-to-day lives. Unwilling to accept the status quo, Takeo Takakura, the president of Kitanohashi High school's Magic Club, has declared that it is the duty of the club to single-handedly defeat the invaders and secure the freedom of all humans. Unfortunately, the Magic User's Club has only five members and of those, only he and his vice-president know how to use magic effectively! On top of that, the club president finds it to be a daily struggle to keep his perverted nature at bay long enough to focus on the task at hand.

But all hope is not lost, for Takeo finds an eager and energetic (though not quite able) student in new club member Sae Sawanoguchi. Seeking to overcome her clumsiness and low sense of self-worth, Sae declares that she will follow in the footsteps of Takeo, and become a powerful magic-user. Will Takeo, Sae, and the rest of the club learn to control their power and become the hope of humankind? Only time will tell, but one thing is certain: wherever the Magic Users Club goes, hilarity is bound to follow!

The TV series continues the story. The main plotline is about Sae and a mysterious androgynous waif.

There are also two different manga. One is a shounen manga and maintains the same light feel in the OVA. The other is shoujo, and is much darker and has several different characters as well.

Next time, Sae, go BEFORE you get stuck in a closet with some dude!

Next time, Sae, go BEFORE you get stuck in a closet with some dude!