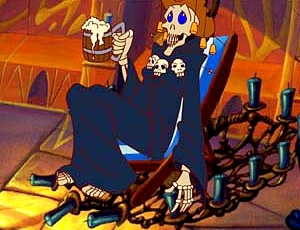 So shalt thou feed on death, that feeds on men,
And death once dead, there's no more dying then.
— Sonnet 146, William Shakespeare
Advertisement:

Something happens to the personification of Death such that the very concept of death is suspended. Maybe Death just decides to quit, or maybe someone "captures" Death. Maybe Death itself has died. Regardless of the how and why, the Reaper isn't doing his job any longer, and people don't die anymore.

At first this seems wonderful, but eventually the Aesop rears its (sometimes ugly) head. People injured beyond repair and in excruciating pain aren't given release, or the threat of an Overpopulation Crisis is mentioned, or people abuse their newfound immortality, or the writers just flat out say reality itself will collapse. The heroes either ask Death to return, or else free Death from whatever force has contained it. If the heroes themselves got rid of death, they'll discover The Problem with Fighting Death is you just can't win. Death may levy this as punishment for some crime against the natural order, and make it worse by coupling it with Age Without Youth.

Alternately, people do still die, but they're all Rerouted from Heaven or Barred from the Afterlife, ending up as The Undead or Ghosts or stuck in the Afterlife Antechamber.

If someone else has to take over for The Grim Reaper, it's a case of Relieving the Reaper.