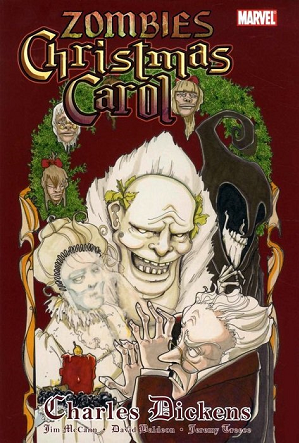 And so with Scrooge laying as mankind's last hope, Humanity might as well have extinguished its final fires this very Christmas Eve.
Advertisement:

Zombies Christmas Carol is a limited miniseries published by Marvel Comics in 2011. It's written by Jim McCann and illustrated by‎ David Baldeon and Jeremy Treece. While not connected to the Marvel Zombies line, it has themes in common with the work, featuring renowned characters battling the zombie apocalypse—in this case, Ebenezer Scrooge of A Christmas Carol.

One Christmas Eve, as a plague of zombies inexorably sweeps through London, Scrooge refuses to help anyone affected by the circumstances, including his nephew Fred, his clerk Bob Cratchit, and especially the Hungry Dead themselves. He's visited by the zombie ghost of his former partner, Jacob Marley, who warns Scrooge that he will be visited by three other spirits in his only hope of changing himself and saving the world. For Scrooge has much more to do with this plague than he'd care to admit, and humanity's time is almost up...