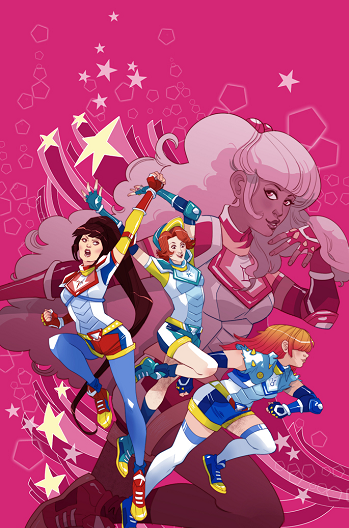 By the power of Astra, Starforce lights the way!
Advertisement:

Zodiac Starforce is a Magical Girl comic published by Dark Horse Comics, written by Kevin Panetta and with art by Paulina Ganucheau. Part of a long line of mystic defenders, Emma, Kim, Molly and Savanna are Gemini, Taurus, Pisces and Aries, an elite group of teenage girls with magical powers who are sworn to defend our planet against evil creatures. Two years ago, they battled the evil goddess Cimmeria, but since her defeat, the team has split up. Now, monsters have begun reappearing...

The series later received a sequel entitled "Cries of the Fire Prince" which follows up on the reveal that there are more members of Zodiac Starforce out there.