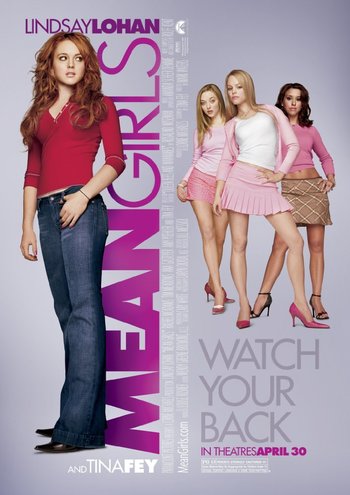 "Where you sit in the cafeteria is crucial because you got everybody there. You got your Freshmen, ROTC Guys, Preps, JV Jocks, Asian Nerds, Cool Asians, Varsity Jocks, Unfriendly Black Hotties, Girls Who Eat Their Feelings, Girls Who Don't Eat Anything, Desperate Wannabes, Burnouts, Sexually Active Band Geeks, The Greatest People You Will Ever Meet, and The Worst. Beware of The Plastics."
— Janis Ian
Advertisement:

Mean Girls is a fairly trope-heavy 2004 teen comedy film directed by Mark Waters, written by Tina Fey (who also has a supporting role), and starring Lindsay Lohan and Rachel McAdams. It was loosely adapted from Rosalind Wiseman's 2002 book Queen Bees and Wannabees: How to Help Your Daughter Survive Gossip, Cliques, Boyfriends and the New Reality of Girl World. Very loosely adapted — as implied by the subtitle, it's actually a non-fiction self-help book along the lines of what you'd expect from Dr. Phil. The story goes that Fey didn't even realize this and just bought the story rights from the title alone.

The plot centers around a girl named Cady Heron (Lohan), who's a new student at a high school that is socially dominated by "The Plastics", a clique of popular-but-cruel girls led by Regina George (McAdams). Cady's Cool Loser friends Janis and Damian persuade her to join Regina's Girl Posse for the purpose of spying on Regina. The plan works too well; before long, Cady ends up identifying with Regina's whole value system. There's lots of bitchy backstabbing, lots of lessons learned, and lots of funny situations along the way. Overall, it's something of a Lighter and Softer Spiritual Successor to the black comedy Heathers, especially given that the writer of that film and the director of this one are brothers.

Has a Nintendo DS game adaptation and a direct-to-DVD sequel, Mean Girls 2 (in which only Tim Meadows reprised his role as Principal Duvall). A stage musical premiered at the National Theatre, Washington, D.C. in October 2017 and opened on Broadway in April 2018, with a book by Fey. In January 2020, it was announced that a film adaptation of the musical had entered development.

Now has a Character Sheet under construction.

These tropes are so fetch!

Students are both fearful and in awe of Regina George, the mean queen bee at their high school. Janis loathes her and calls her evil, while random students tell the camera high-flying rumors they've heard about her.

Students are both fearful and in awe of Regina George, the mean queen bee at their high school. Janis loathes her and calls her evil, while random students tell the camera high-flying rumors they've heard about her.