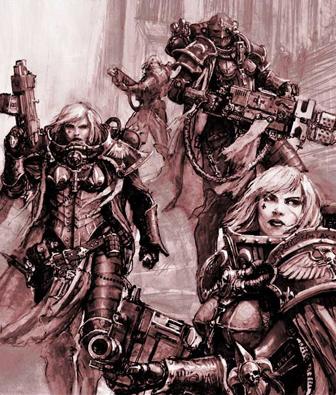 May the God-Emperor have mercy on you.
They shall not.
"Sisters of Battle, reporting!"
— Battle Sisters Squad, Warhammer 40,000: Dawn of War: Soulstorm

The Amazon Brigade is an elite fighting unit, often the best of the best or damn near close to it, that is composed entirely of women. Naturally, they should never be underestimated, for they can and will kick your ass, potentially easily.

They are The Squad, with about four liters of estrogen added, and little to no loss in testosterone. They are the Lovely Angels after a recruitment drive. In any case, they are a Badass Army.

This trope is common with Humongous Mecha anime, and Science Fiction in general, especially if they use fightercraft in their universe. Occasionally it shows up in Fantasy works as well, usually as the personal guard of a wealthy and powerful ruler.

In a Bishoujo Series, they are probably the main characters, their existence in this case due to the Improbably Female Cast policy. They may include The One Guy for good measure. Expect some degree of Ho Yay, especially if they are kept isolated from men. This being about fiction, they're usually at least moderately attractive.

Not to be confused with Estrogen Brigade.

Contrast The Smurfette Principle. If the entire world is an Amazon Brigade instead of a single squad, then you have a World of Action Girls. Similar to Battle Harem (an Amazon brigade in love with the same guy).