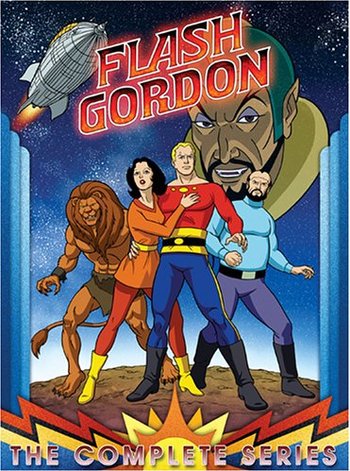 Thun of the Lion Men, Dale Arden, Flash Gordon, Dr. Hans Zarkov, and the evil floating head of Ming the Merciless
"Blasting off on a desperate mission to save Earth from the evil plottings of the tyrannical space lord Ming the Merciless, Dr. Hans Zarkov and Dale Arden have joined me, Flash Gordon, on a fantastic journey into worlds where peril and adventure await us!"
Advertisement:

come to life, with lion-men instead of ligers.

The series was originally a single film, Flash Gordon: The Greatest Adventure of All, written by Samuel A. Peeples, one of the writers for Star Trek: The Original Series, and it turned out so well, NBC decided to have it as a Saturday morning TV series instead. This meant cutting up the footage for their usual animation cycles with more animation. In 1982, after the series was cancelled, the original film was broadcast for the first time on prime time and syndication.

The first season was serialized and followed the original comic strip remarkably faithfully. After the network complained that the serial was too difficult for kids to follow, the second season consisted of standalone episodes, and a Team Pet was added, Gremlin the dragon. Older viewers are likely to prefer the serialized episodes, while younger viewers are likely to prefer the later, more simply-plotted standalones.

Though the best-known animated version of Flash Gordon, it was not the only one. Flash Gordon also appeared in two animated Massively Multiplayer Crossovers with other King Features heroes: the one-off special The Man Who Hated Laughter and the series Defenders of the Earth, which also featured Flash's archenemy Ming the Merciless as its Big Bad. Another animated series debuted in 1996, featuring hoverboard-riding teenaged versions of Flash and Dale.