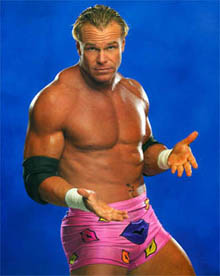 Monty "Kip" Sopp (born November 1, 1963) is an American professional wrestler born in Orlando, Florida and residing in Austin, Texas who is best known for his work in WWE as Billy Gunn. After four years in the indies, Gunn debuted in the then-WWF as part of the Tag Team, The Smoking Gunns along with his "brother" Bart Gunn. The Gunns held the WWF World Tag Team Titles

3 times. After Billy and Bart broke up, Billy briefly aligned himself with the Honky Tonk Man under the name Rockabilly. Rockabilly had a brief feud with "The Real Double J" Jesse James, which led both to realize that they should team up, and Rockabilly dropped Honky Tonk Man (by nailing him with an acoustic guitar). Both men renamed themselves, James becoming "Road Dogg" Jesse James and Rockabilly the "Bad Ass" Billy Gunn, together they were The New Age Outlaws. Together, the Outlaws won the WWF World Tag Team Titles 5 times, aligning themselves with and eventually joining D-Generation X. Gunn eventually left DX and broke up with the Road Dogg, renaming himself Mr. Ass, a wrestler who mooned opponents and briefly wore see-through tights. For a brief time he renamed himself "The One" Billy Gunn and teamed with The Big Show and they became the Show Gunns.

Afterwards, Gunn teamed up with WCW refugee and former Alliance member Chuck Palumbo, becoming Billy and Chuck. The two began acting more "affectionate" toward each other over time and hired the services of the flamboyant hairdresser Rico Constantino. Things came to a head when Chuck proposed to Billy and gained national media attention. The pair had to finally admit that they were not gay, it was just a wrestling gimmick and publicity stunt devised by Rico. Angered, Rico turned on the pair and teamed with Eric Bischoff and 3 Minute Warning. Billy and Chuck won the WWE World Tag Team Titles 3 times and got revenge on Rico and 3MW. In 2004, after 11 years in the company, Gunn was released from his WWE contract. Over the course of his WWE run, he held the WWF Hardcore Title

twice and the WWF Intercontinental Title

Gunn also worked in TNA, under the name The Outlaw. He also reunited with the Road Dogg (then known as BG James) in 3LiveKru (becoming 4LiveKru after he joined). Changing his name to Kip James, the pair became the James Gang and then Voodoo Kin Mafia after 4LiveKru dissolved. In 2008, Kip turned on BG and became the image consultant for the all female Alpha Bitch stable The Beautiful People, renaming himself Cute Kip. A year later, he was fired by the Beautiful People and then fired from TNA altogether.

In 2012, Gunn returned to WWE as a trainer for NXT. Two years later, the New Age Outlaws won the WWE Tag Team Titles

, further cementing him as one of WWE's most decorated tag team wrestlers. In 2015, Gunn was fired from WWE for testing positive for performance enhancing drugs in a power lifting competition.

He was inducted into the WWE Hall of Fame in 2019 as part of D-Generation X's group induction. He's currently employed by All Elite Wrestling, mostly as a producer but also as a wrestler. His last singles action was in the Dynamite Dozen Battle Royal on the November 20, 2019 episode of AEW Dynamite, but he's since returned to the tag team ranks, teaming with his son Austin as Gunn Club, and then being joined by his other son, Colten.

Not to be confused with actor, writer, and director Bill Gunn.