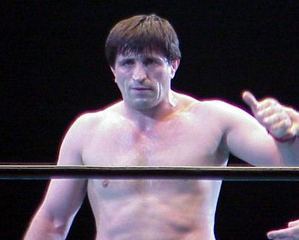 "He may not look like it, but is the next big thing in the fighting world. Wait to see what he can do in the ring."
—Akira Maeda about Volk Han
Advertisement:

Volk Han (born Magomedkhan Amanulayevich Gamzatkhanov, April 15, 1961) is a Russian sambist, professional wrestler and Mixed Martial Arts fighter. Initially a freestyle wrestling star in his native Russia, he got in a whole new way when he was drafted to the Russian Army and put to work in the martial art of sambo. He won national and international tournaments, gold medals and cups, and served as a hand-to-hand trainer for both the army and the police. However, he didn’t see the spotlight until he was recruited by Akira Maeda for his professional wrestling promotion Fighting Network RINGS. Despite coming from a country with virtually no pro wrestling tradition, he soon turned out the promotion’s top gaijin, stunning the Japanese crowds with his uber-excellent grappling and ability to work technical matches with everybody. When the promotion transitioned into MMA, so did Han, who showed his true fighting skills by reaching the finals of the King of Kings Tournament. He retired after the demise of RINGS, but he remained as a MMA trainer, founding the famous Russian Top Team and serving as mentor for the lauded Fedor Emelianenko.