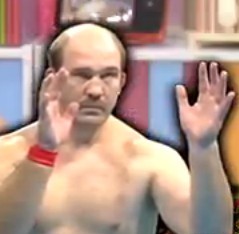 Watch out for a leglock.
"His kansetsu-waza is one of the best in the world. His stamina, unfortunately, is not."
—Kenichi Takayagi, Japanese RINGS commentator.
Advertisement:

Andrei Kopylov is a Russian sambist, professional wrestler and Mixed Martial Arts fighter. He started his career as a regular sportsman, but he switched to the martial art of sambo, and he proved to be a rising star when he tapped out his own coach after only some months of training. Soon he was competing at national scale, winning medals and championships at two weight categories, but his plans to challenge for the world title were derailed by the political situation of USSR. For that reason, Kopylov left sambo behind and embraced professional wrestling, joining Akira Maeda in his promotion Fighting Network RINGS. He would become an instant fan favourite for his ridiculously anodine looks and no less ridiculously brilliant grappling, and RINGS's transition to MMA only served to propel him even higher with an outstanding performance at the first King of Kings Tournament. However, the age and scars soon took their price, and Kopylov wandered through RINGS brands until joining Volk Han to form the famous Russian Top Team, mentoring dudes like Fedor Emelianenko and Sergei Kharitonov.