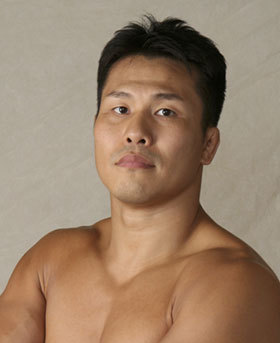 "He was a kinda reserved guy, but among the opponents in my career, he was definitely top place, because he was a super, super skilled guy. I just think he came in the wrong time. When we moved into MMA he simply wasn't strong enough to compete with the bigger guys he was going against."
—Frank Shamrock
"Sakuraba and Tamura were two of my boys. Tamura had a big head, he had an attitude, and he thought he was God's gift to MMA."
—Billy Robinson

Kiyoshi Tamura (b. 1969) is a Japanese Professional Wrestler and Mixed Martial Arts fighter, best known for his work in Union of Wrestling Forces International and Fighting Network RINGS. He started as a pro wrestler in the second UWF, debuting as a promising neophite, but his ascense was stopped after being injured in the face by star Akira Maeda. The UWF fell, and then Tamura found himself working in UWF-i, where he was appointed as Nobuhiko Takada's apprentice. A legitimate fighter, Tamura had his MMA debut submitting a boxing champion, and ascended fastly in the roster, learning grappling with Lou Thesz and competing in important tournaments. However, he became disillusioned with the UWF's lack of interest in more realism and real fighting, so he left for Fighting Network RINGS, Akira Maeda's company. He became his top student and wrestled memorable shoot-style and MMA bouts, frequently against foreign opponents very superior both in weight and preparation. However, Kiyoshi held important victories and became the second Japanese fighter in beating a Gracie after his old rival Kazushi Sakuraba. When he got tired of Maeda and the RINGS schedule, Kiyoshi joined PRIDE Fighting Championship and reconciled with Takada, and after beating fellow legends Sakuraba and Masakatsu Funaki, he unofficially retired from MMA altogether. Only recently he came back for some special events, mainly the pseudo-MMA Ganryujima promotion.