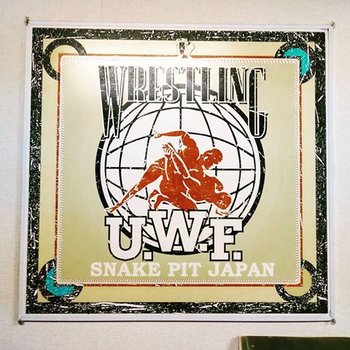 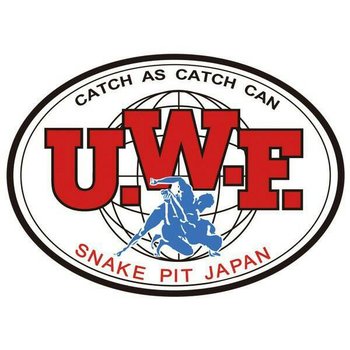 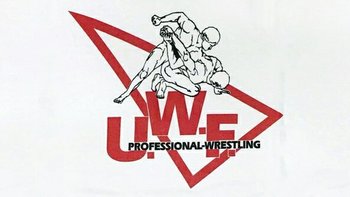 "...The wrestlers of the UWF and its children entertained thousands, sold out the Tokyo Dome in mere minutes, and invigorated traditional wrestling companies with their energy and devotion to clean finishes and an athletic aesthetic. In the end, wrestling went in another direction entirely. The war was lost. But sometimes the best stories are told about the losers, about the valiant struggle that comes up short. That’s the story of the UWF revolution—a brilliant failure. The wrestlers of the UWF fought the good fight. And that’s a story worth telling."
— Jonathan Snowden, on Shootstyle Wrestling: Why Does it Matter?
Advertisement:

Universal Wrestling Federation (later called UWF Newborn) was a Japanese Professional Wrestling company founded in 1984. Established by former members of New Japan Pro-Wrestling, UWF was the first promotion in featuring the realistic "shoot-style", and though it featured mainly worked matches, it influence arguably gave birth to the modern Mixed Martial Arts in Japan and abroad.

The first incarnation was created by NJPW executive Hisashi Shinma after a monetary incident involving Antonio Inoki and him, expecting it to become the next promotion to relaunch Inoki's career after a possible ousting from his company. As this never had place, UWF started to operate by itself, and after disposing of Shinma, it gathered all the New Japan wrestlers who were discontent with the old company. The main ones were Yoshiaki Fujiwara and his young apprentices, who desired to take a new and exciting style based in the old real fighting doctrines inherited from Catch Wrestling master Karl Gotch. Under this premise, Akira Maeda and Satoru Sayama become the stars of UWF, until a falling out between them caused the promotion to collapse. Sayama retired from pro wrestling to focus on his gym and develop a new combat sport.

Maeda and the rest of UWF members returned to New Japan, where they formed an invasion stable against the native wrestlers, but their return met with backstage heat. Although Maeda was set to become the next big star, Inoki was not willing to give him his place and, after he shot on Riki Choshu, the UWF staff ended leaving again to continue his shoot-style adventures. The next incarnation, UWF Newborn, got insane amounts of success thanks to its refined real wrestling style and young wrestlers, and it even started to feature shoot fights with some regularity. However, Newborn lasted only two years and broke in various factions with its own ideas about how shoot-style should be done, a circuit nicknamed U-system. Among those were Pro Wrestling Fujiwara-Gumi, Fighting Network RINGS and UWF International, the latter getting considered the "official" or most successful one and being the detonating behind PRIDE Fighting Championships and the MMA boom in Japan and United States. Outside of those three, other promotions formed and declared themselves "shoot-style", whether it was to a) prove that their wrestlers were tough, b) replicate the financial success the U-system circuit seemed to enjoy, c) add shoot style moves to their wrestling style to make it seem different, or d) express their thought that shoot style was the coolest style around, to varying degrees of success.

Currently only Shooto, RINGS, Pancrase, and Kingdom remain active as part of the original U-system, and this concept itself has been pretty much forgotten in those promotions, but it figures as an immortal part of puroresu and MMA history. Shoot style wrestling itself has however started a kind of comeback in recent years with several promotions in Europe and America putting on full cards under shoot style rules.

NOT related to the Universal Wrestling Federation promotion run by Bill Watts in the former NWA Mid-South territory in the 80's, nor to the promotion of the same name run by Herb Abrams in the 90's. It's also not to be confused with Gran Hamada's UWF, which is more popularly referred to as Universal Lucha Libre or abbreviated as FULL for distinction purposes.