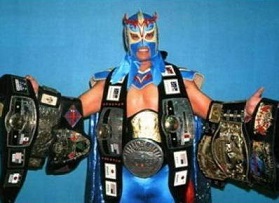 As the Octuple J-Crown Champion

AND the WCW World Cruiserweight Champion

Yoshihiro Asai (born December 12, 1966) is a Japanese Professional Wrestler, trainer, promoter and actor best known for his work as Último Dragón. He debuted in 1987 for New Japan Pro-Wrestling but moved to the Universal Wrestling Association in Mexico, where he won the UWA World Welterweight Title

in 1988. In 1990 he returned to Japan to work for the Universal Wrestling Federation and Universal Lucha Libre, the latter which was founded by his mentor Gran Hamada. He returned to Mexico in 1991, specifically to CMLL, where he started the Último Dragón gimmick. He went back and forth between CMLL and WAR, and got to win the New Japan IWGP Junior Heavyweight Championship

twice due to the companies having a cooperative agreement. He debuted in WCW in 1996 as a Heel, with WCW having changed his name to "Ultimate Dragon," though it actually means "Last Dragon," as his original gimmick was that he was supposed to have been the last student of Bruce Lee. He made his PPV debut at WCW Hog Wild 1996 in a loss to Rey Misterio Jr. He would hold the WCW World Cruiserweight Title twice and the WCW World Television Title

twice. In 1998, he suffered a serious arm injury, which was made worse by a botched surgery which caused nerve damage and led to him having to retire. He became a trainer, with some of his early students including Dragon Kid, Magnum TOKYO, CIMA and SUWA, and was a co-promoter for IWRG in Mexico. He started his own promotion, Toryumon, with a roster made up mostly of his students. He parted ways with the promotion after it was renamed Dragon Gate. He had a second, this time successful, surgery in 2002 and got back in the ring for his T2P (Toryumon 2000 Project) and Toryumon Mexico promotions. He debuted in WWE in 2003 following the company's success with Rey Mysterio Jr.. However, his run was not successful, as apparently Vince McMahon had thought Dragon was the same kind of wrestler as Mysterio, and proceeded to bury him as a result. Dragon left in 2004. He wrestled for Dragondoor, a promotion run by his students, but it did not last very long. He has continued to compete in Mexico, Japan, Canada and Europe ever since. Along with the ones mentioned above, he has competed for All Japan Pro Wrestling, Fighting Opera HUSTLE and AAA.